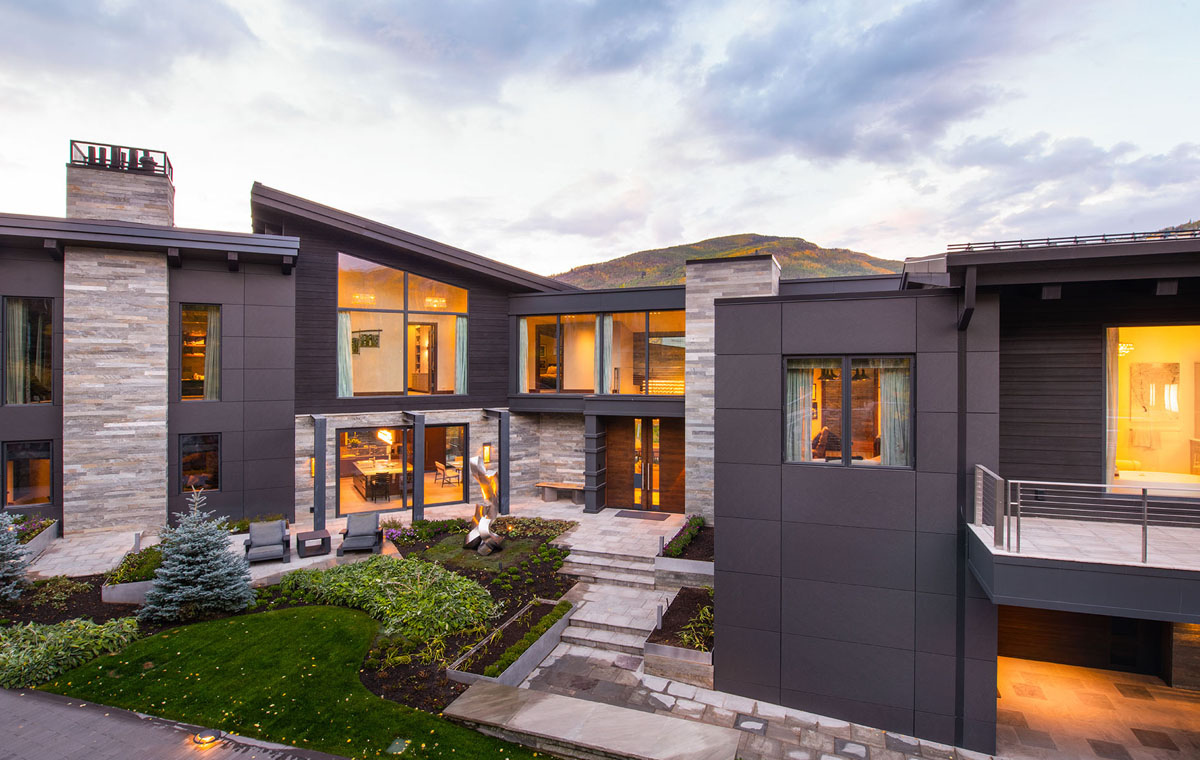 Modern architecture, also known as modernist architecture, focuses on using innovative and current construction technologies such as glass, reinforced concrete, and steel. The main idea behind the aesthetic is that form should follow function while embracing minimalism. Such designs reject ornamentation, as is visible in most iconic modern buildings.

Modern architecture styles span decades, but first started to dominate during and after WWII. Here is a quick history of the sub styles of modern architecture and a guiding vision when considering these styles in your Vail, CO, home.

The style began in America and spread globally and is still among the most enduring and popular modern designs. Frank Lloyd Wright is the brains behind the style. His most famous home, Fallingwater, was designed to integrate seamlessly with nature. It featured large windows, open-plan living spaces, glass doors, structural columns, and a smooth flow of the interior and exterior spaces.

The designs feature various playful color palettes with pops of bold color and graphic monochrome sometimes offset with calm neutrals. You will also find natural materials like stone and wood placed on concrete and glass. Some prime examples of homes that remain timeless with the design include Vitra Eames House Bird, built by top designers Charles and Ray Eames.

It exploded into the design space in the 1950s, and the decades proceeding, it saw an influx in the number of people looking for the design style. Mid-century homes and suburban development in the world boomed after WWII.

For lovers of simplicity and craftsmanship, the Scandi approach takes the day. The architects here focused on reinterpreting modernism. The style features calm and cozy interiors designed for the cold Nordic climates with muted and external colored pallets.

One notable architect who embraced flowing curves and fluid shapes for most of his designs was Alvo Aalto- a Finnish architect who made designs that integrated modernist angles with sharp lines.
The styles connect the home to the natural surroundings by material. You will find warm-toned woods such as rosewood and teak juxtaposed with steel and glass. One of the most iconic pieces that combine this style’s unrivaled practicality and elegance is the Series 7 chair made by Swedish and Danish furniture makers Arne Jacobsen and Hans Wegner.

The style came into existence in pre- and post-WWII. It also became popular during the Mid-Century Modern style. Its appeal continued to spread when Sweden’s design exporter Ikea opened in 1943 to start offering affordable-style furnishings.

The early 20th century saw a burst in Art Deco. The style is synonymous with hedonism and luxury. Art Deco is an inspiration from the pyramids of Egypt, luxury cruise ships, and far-flung travel. The designs feature symmetrical lines and sleek curves that create streamlined looks with an assortment of rich materials.

You will notice chrome, mirror, lacquer, and brass as the most popular finishes. Abstract and nature-inspired motifs make up the geometry of the style.

The style was born in France, emerging in 1925. It rose to fame quickly after appearing at the Exposition Internationale des Arts Décoratifs in Paris. Its popularity continued through the ‘20s and ’30s Great Depression. It started thriving internationally, reaching America, Brazil, and China.

Pierre Chareau, one of the most famous architects of this style, helped give a name to the aesthetic. His furniture and design is exhibited in an exquisite Parisian residence, the Maison de Verre. Others involved in Art Deco include Oliver Hill of Britain, who has several spectacular Deco buildings to his name.

The design also encompassed furniture design, especially pieces made of plywood and tubular steel. These came alongside artworks and textiles created by couples such as Josef and Anni Albers.

The first Bauhaus school opened its doors in 1919 in Weimar. Gropius finished the first design of a new building in Dessau in 1926. During WWII in the thirties, the designers had to flee from Germany to America, Europe, and Britain. They went with their ideas that they spread all over the places they went, followed by a modernist movement for the rest of the 20th century.

The Mountain Modern style is the most popular design in recent years. It is an evolution of vernacular mountain style with a contemporary twist. The modern home style combines rustic elements with clean contemporary architecture lines, resulting in oversized windows, clean lines, and natural color schemes that spell luxury and warmth.

It is the opposite of the classical style and has smooth profiles instead of ornamentation. The style is bold, with sleek kitchens, mixed textures, natural light, and more open spaces. It offers sustainability with its new features that will boost your home experience by bringing the best of both mountain retreats and charming city life.

Let us help you create your dream Vail, CO, home. Contact us today to receive your free quote.